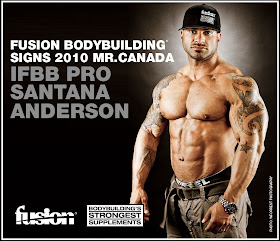 The Nationals represented a wildly successful return to competition for Anderson after a four-year absence. “Towards March of this year, my training partner, Salim Satir, and I began training together, and we both began to have aspirations to do the Nationals in August. Within weeks of seeing great results, I rediscovered my passion for training and became fully committed and excited with my prep.” Anderson says. “Winning the overall felt amazing – a vindication of years of hard work, sacrifices and effort put forth in the gym and kitchen. I was lucky enough to have it been my day to succeed.”

Anderson is excited about being sponsored by FUSION BODYBUILDING. “FUSION is just a natural fit for me. It is Canadian, supports bodybuilding and has a culture that understands what this sport is all about. I want to commend the company on bringing forth such a great line and having content on its website that supports the bodybuilding lifestyle.”

FUSION Co-president Adrian Burke agrees. “Santana is exactly the type of dedicated, hardworking bodybuilder that we created FUSION BODYBUILDING for. He not only works hard and smart but also lives the sport, has an unbelievable physique and is a great guy. It’s obvious he’s going to go far, and we look forward to helping him along the way.”

Founded in 1998 by Ryan Herniman and Adrian Burke, FUSION BODYBUILDING is a top nutraceutical company dedicated to providing bodybuilding supplements to true followers of the sport. All of FUSION’s products start in the gym and are perfected in the lab by its innovative research and development team. FUSION products are sold worldwide.